What goes up .....doesn't always come down

I’m a church secretary. It’s a wonderful job, but often misunderstood. Recently, a woman from the
community came into my office to pay the fee for the space she had rented from the church. I was alone in the office, music was playing – the atmosphere was quite peaceful. She said 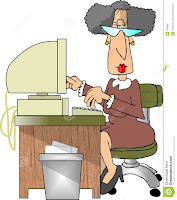 to me, “Geez don’t you get bored just sitting here all day?” Seriously?! She has no idea of the rigors of being a church secretary!


You see, last Friday, not only did I prove that the work of a church secretary comes with great risk, I also disproved the theory that “what goes up must come down”. I’m not a very scientific person but on Friday, I showed that theory what’s what!


A delivery came in for the day care located in the basement of the building. Fives boxes of supplies, a couple of them were heavy. I typically call the director and tell her they have had a delivery but since I had 180 Sunday School books to deliver to various classrooms in the basement I decided to kill two birds with one stone and take all things that belong to the basement down at one time. Furthermore, one of the boxes was a little too heavy for me to carry and well, it was just my day to do something nice for somebody for a change.


I decided to take a cart from the kitchen, load it with all my items and take them down on the elevator. Now let me just set the stage for you a bit. The elevator is small. The cart is plus size, as am I. But the cart and I have traveled on the elevator together in perfect harmony many times.  I carefully loaded my items onto the cart, making sure to place the heavy box on top with the Sunday school books fitting snuggly around it. The bottom shelf contained the lighter boxes and a couple of stacks of books, positioned so that they would not fall off the cart in transit.  I had much to do in the office, so I wanted to get this done as quickly as possible.


The front wheels of the cart are kind of “wonkey,” so it tends to move easier if you push from the rear of the cart instead of the using the handle end of the cart. The elevator is rather old and has two doors on either end, one of them is the hard-wooden outer door, the other a folding accordion style door. Once in the elevator the accordion door must be shut tightly before the manual button system will engage. Once you shut the accordion door one must push and hold the button of the desired floor until it reaches said destination. Once there, the accordion door on the other side is slid back, which unlocks the wooden door so it can be pushed open to exit. Easy, peasy.


Because of the wonkey wheel I pushed the cart in handle first. I positioned my plus sized body behind the plus sized cart and shut the accordion door behind me and pushed the basement button to begin my decent, feeling pretty good about my ingenious idea and the efficiency of my efforts.  As the elevator started it’s decent the accordion door handle and the cart handle collided! Yikes! This is when I realized that I usually push the cart in with the handle side toward me. I’d have to make an adjustment, but since there wasn’t much room in the elevator, I quickly hit the “1” button, which was the closest to me, and sent the elevator the other way so that I could go out, turn the cart around and begin again. 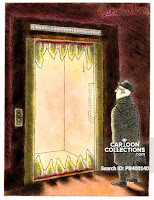 The elevator arrived on the top floor. I leaned over the cart to push open the folding door so I could push the cart out. As I raised up from leaning over the cart several of the books fell off the cart and onto the floor, right onto the sliding door track. “Oh well, I’m going to get off here anyway, I’ll just roll over the books, since I can’t reach them due to the expanse of the cart and pick them up after I’m out,” was my thought.  I gave the cart a push to open the door, the door didn’t budge. I gave the accordion door another little push to make sure it was back far enough, pushed the cart – door still didn’t budge.


Now I’m realizing my predicament. The solid door will not open, I lean over the cart again to try to push it with my hands, knocking more books off into the floor as I go – it is locked!! I’m unable to shut the folding door again because of the books that are in the way, meaning I won’t be able to go down to the next floor. This is when the sweat began to happen.


Being extremely thankful that I went to the bathroom prior to entering the elevator, I reach for my cell phone in my pocket to call the day care director, Portia. No Cell phone! More sweat! Now, I have fully entered panic mode where boring 54-year-old church secretaries tend to only think about bladder issues and the lack of important things like snacks and air space. There is a red button on the panel labeled alarm. Seeing how I was certainly in alarm mode I pushed the red button, over and over – it’s faint ring being heard only in the confines of my crowded space. Cursing the engineer of the alarm button under my breath, I inhaled deeply, cautious not to used up all of my limited air, and tried to gather myself. And that’s when I remembered!  The PHONE! There is a phone in the elevator. I opened the little trap door that houses the phone, lifted it to my ear and heard the delightful sound of a dial tone. MUSIC to my ears! I dialed the day care office, since the Pastor wasn’t in. Portia, the director answered. Oh boy, I dreaded this – I knew she’d get a bang out of me being stuck in the elevator. Because of my recent run of luck, I didn’t mince words for fear the phone also would quit working – I blurted out – I’M STUCK IN THE ELEVATOR! Followed by a brief silence and then laughter on the other end…and then….” I’m on my way”.


Portia peered through the small glass window in the elevator in amazement of what she was seeing. You’d have to talk to her to get the full details but I’m guessing she’d describe the scene as such: A tiny elevator filled with a hot, red, sweaty, teary eyed, panicked, plus sized church secretary crammed up against the wall by a plus sized cart with books and boxes scattered everywhere. She checked on my well-being and promised to call a Steward to help. I was using one of the 180 books to fan myself while she called Mike – my Knight in shining armor and officially my favorite person.  In the meantime, Portia entertained me by pressing her nose against the glass and trying to keep things light.


I was feeling pretty bad that we had to bother Mike so I decided I was going to attempt to lay over the cart again and see if I could reach the books on the floor and help myself. Portia begged me not too. I didn’t listen – what’s she gonna do right? So, now Portia watched through the tiny class as I laid my plus sized body over the plus sized cart scattering books and boxes. At one point my feet were straight up in the air and I’m sure it was a sight to see. But I could not stretch far enough to get the last book out of the track of the door!  Just wasn’t happening and I was resigned to the fact that I had officially done everything I could do to free myself.


Knight in shining armor, Mike, arrived on the scene and peered in the window. He looked frantic (but was probably more inclined to laugh hysterically) as I’m sure what he was seeing looked impossible. He had the Steward Chairman on the phone telling him where to find the emergency key! I started to relax. Hooray, there is an emergency key! I began to tidy up my space as Mike went to fetch the key, freedom was right around the corner.


KEY WOULDN’ T WORK! More sweat. This time from Mike. He retrieved vice grips to try to make the key turn – NOT HAPPENING. More sweat – from all three of us! At last Mike decided to see if the bottom door would unlock. From that door I was between floors, so getting out would be trickier but I would jump if I had to. At last FREEDOM! Bottom door was opened, Mike scooted a chair over and I climbed out awkwardly, but I made it out and that’s all I cared!


Mike saved the day. I was feeling embarrassed and terrible that I had infringed on everyone’s day and wondering if I had somehow screwed up the elevator. We all got on with our life. Mike called the elevator repair man. Portia carried all the boxes down, I delivered all the books but was left with the task of returning the cart to the kitchen up the stairs. I tugged and pulled it up the stairs, one step at a time. That is when I hurt my shoulder.


I took Tylenol for the shoulder pain. Went to the potty, just because…well, I could now, and promptly ate two pieces of chocolate. Only because there was no hard liquor in the church office. I left at my normal time. Went home to an overcooked ham in the crockpot and the corn casserole I baked was burnt on the outside and gooey in the middle.


Yesterday, at lunch my family marveled at the dark bruises that ran up my arm. “Hmmm,” I said, “Must’ve happened in the elevator incident”. I looked at the bruises and felt a strange sense of pride. Just like a valiant warrior proudly wears the battle scars of the war he fought to save his tribe, I too proudly wear the bruises of Sunday school curriculum delivery in honor of all Church secretary’s everywhere.


And to the lady who wondered how I can stand such a boring job….” HOW DO YOU LIKE ME NOW, TOOTS?” 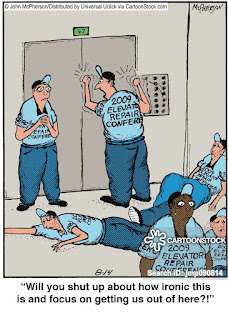