Lessons from the pig pen!

It’s that wonderful time of year again.  Time to start working with the 4-H projects. This year’s Hannah’s going totally solo.  Solo meaning she doesn’t have the expertise of older brothers along the way…just the help of an enthusiastic time deprived dad and a “I’m not really interested but will do this cause you want to” mom.

The fun began last night when the first tears of the season were shed in Uncle Jerold’s pig barn.  The pig is cute at this point – still young, little and bright eyed…..and very curious!

Covered in the Stench that only pigs can take the pride in owning, we led said piglet out so Hannah could get better acquainted with him.  Dad had pointed out the pile of manure by the back door where the pens had been scraped and cautioned Hannah not to let piglet in there.

It doesn’t take a mental heavyweight to figure out the math on this one.  Frisky Piglet + fresh pile of slick manure = a slice of piggy heaven!  Of course, that was the one spot Piglet wanted to go to and dad kept telling Hannah not to let him go over there, encouraging her to use her guiding pipe to keep him out.  One wrong slip in the slime and you’re surely to get a lame pig and a good portion of baby back ribs!

So, on his third trip to the slime and Hannah’s third lame attempt of keeping him out – dad raised his voice!  Now, depending on who you were in the barn at the time, the definition of dad’s raised voice could be interpreted differently.  To Hannah it was out and out YELLING deducing her to tears, and a screaming tantrum about how she doesn’t like being yelled out and how the PIG IS A PIG – What do you expect and so on.   To dad – it was constructive parenting and measures used to save the pigs life.  To Uncle Jerold it was the sweet reminiscent sounds of days gone by when he used to compete on the same battleground with his daughters.  To me it was the all too familiar sounds of the beginning of 4H season.  And to the pig….well….it was just the sound of escape while he meandered around the feet of a crying girl, a consoling dad, an encouraging uncle and an eye rolling mama.

The ride home in the truck was equally as fun as dad explained in great detail the fine art of being “coachable” and learning to take a raised voice now and then and how his yelling was out of concern for the pig not because he doesn’t love her or is mad at her and how in life there will be times that people will try to correct the things you do and they may raise their voice and blah, blah, blah, blah,….Hannah was sobbing uncontrollably by this time, still clinging to the fact (in her mind) that dad had yelled at her, not really hearing any of the value of what he was saying and then bursting into a  tearful rendition of “I MISSS NIC”!  At this point I was thinking….Wow – grilled cheese sounds good for dinner!

We all showered and gave kisses and I love yous before bed time and once again – all is right in the land of dysfunction.

Of course,  I am of the firm belief that in all situations there is a lesson to be learned and this time was no different.

Besides the obvious of don’t let the pig go in the poop lest he gets hurt….there are lessons to be learned from our “stinky” yet short time in the pig pen.

Lesson one – If you’re tempted to go play in the poo (do something you shouldn’t) don’t ignore the gentle tap on your snout trying to steer you away.  1 Corinthians 10:13 says:  No temptation has overtaken you that is not common to man. God is faithful, and he will not let you be tempted beyond your ability, but with the temptation he will also provide the way of escape, that you may be able to endure it.

Hannah was trying, although feebly, to steer piggie away from the “sin” a.k.a.poo.  God’s touch, I know, isn’t as feeble as Hannah’s was – but sometimes when tempted – it feels feeble. We might know it’s there – but the temptation is great and we don’t obey and keep on walking.  God provides a way out!!  Awesome!  Just as Joel came and showed Hannah how to really keep the pig from going in the poo; God also gets provides a way with us.  We and the pig – need to listen and heed the push!

Lesson two – Correction should humble us not hurt us.  If Hannah could only have seen dad’s correction as a life saving tactic for the pig at the time she wouldn’t have had her feelings hurt.  Sometimes we get corrected harshly and it bites a little – but we have to learn to be humbled by it – admit our mistakes, work at correcting them and not be bitter toward the one who corrected us.

Lesson Three – great things rise up out of the poo!  Eventually, piglet will become a big strong pig who knows Hannah and her touch and will be familiar with her guidance. Win or lose on his county fair run – he will show Miss Hannah much about hard work, discipline, responsibility and well, how to take a little constructive criticism in life!  All those tough things we’ve been through in life do the same. Like this quote I found today says:

Who knew you could get so much from an evening in the pig pen!   Now go have yourself a grilled cheese! 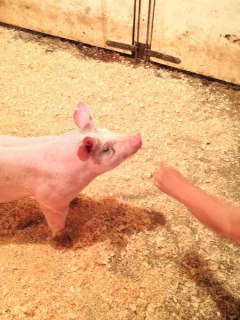