Crossed at the Cross 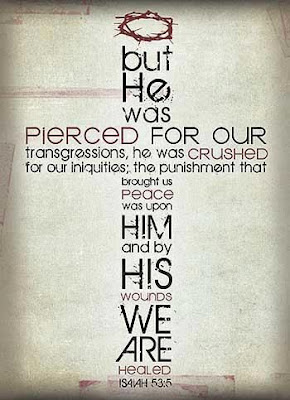 Several years ago, the Ministerial Association in our town developed a Drive-Through Good Friday Service.  Stations of the cross are set up in an empty parking lot and folks from the participating churches show up in costume to fill the spots at the stations. Twelve men are seated around a table to depict the Last Supper, an angry mob follows a bloodied Jesus as he carries his cross, women kneel at the foot of three crosses that depict the cross of Christ and the two thieves and finally the tomb where he lay.  Folks drive up in their cars and are handed a paper with the scriptures applicable to each station.  They can drive by each station and read the scripture pertaining to it, following the last days of Jesus and his death in a time of remembrance and reflection.  At the end of the path Lay-persons from the churches are waiting to serve observers communion in their vehicle and pray for them.
It’s truly a wonderful concept and for the most part has been well received by community and tourists.  The first two years the idea was new and exciting, and folks were eager to pitch in.  But, as it is with many things of this nature, the timing in which it happens (spring break week) and the other events taking place in town, the interest in participating is waning.
I can understand why, I wasn’t much interested in helping again this year. I didn’t sign up to help when our Pastor put out the plea for it. I’ve helped every year, isn’t it someone else’s turn?  I freeze every time and is it worth it to sit in the freezing cold, and have a few cars drive by to observe?
Not many signed up to help, not many churches in the Ministerial Association were fully engaged in it.  I felt obligated to my Pastor, my church and my community to fill a role.  So, out of obligation I begrudgingly draped myself in a sheet, (my costume) and headed uptown on a 32- degree morning already anticipating the ending time of 1:00.  I drug my feet, I even voiced my disgruntlement to my family stating, “I wish I didn’t have to do this!”
WRONG ATTITUDE!!!
Folks were gathered and  taking their places when I arrived. Pastors were trying to spread the sparse turn-out amongst the stations.  There was no one to stand at the three crosses that depicted Christ and the two thieves that were crucified with him.  So, I grabbed a lawn chair from my trunk and with a pastor’s help draped my sheet over it and me to disguise it a bit and got ready to wait out the two hours, dreaming of the hot soup I would make when I got home.
I was cold, I was sore, and I DIDN’T WANT TO BE THERE!  But guess what?  As I looked up at the middle cross from my seat below it I was humbled, and I came to the harsh realization…neither did Jesus.
He didn’t really want to be mocked, spit on, beaten, have nails pounded into his hands and feet.  He didn’t really look forward to the excruciating pain of dying on a cross.  Scripture tells us he even asked his Father to take this cup from him.  And, in the midst, of his torture and agony he cried out to His Father asking him why he had forsaken him.
BUT HE DID IT ANYWAY!
He did it for me because He loved me that much!  Can’t I do this two hours in the cold for Him because I love him that much?  Because I’m thankful that much? Not out of obligation to anyone but, can’t I suffer just this little bit, out of appreciation and adoration of the one who took my sin and shame to that cross on that wretched day?
Ashamed. Humbled. Grateful. Suddenly I wasn’t so cold.  Suddenly my self-centered, self-righteous thoughts lay crumpled in a heap at the foot of that cross.  I stood up, I ditched the chair and my pompous attitude, and I WORSHIPED!
These lyrics played through my mind and a hum rose up in my chest as I stared at the cross while passersby observed my worship.
Thank you, oh my Father
For sending us Your Son
And leaving your Spirit here ‘till Your work on earth is done.

A little cold and a couple hours of my time.  Part of the work on earth? Maybe?  But mostly a check in my attitude!