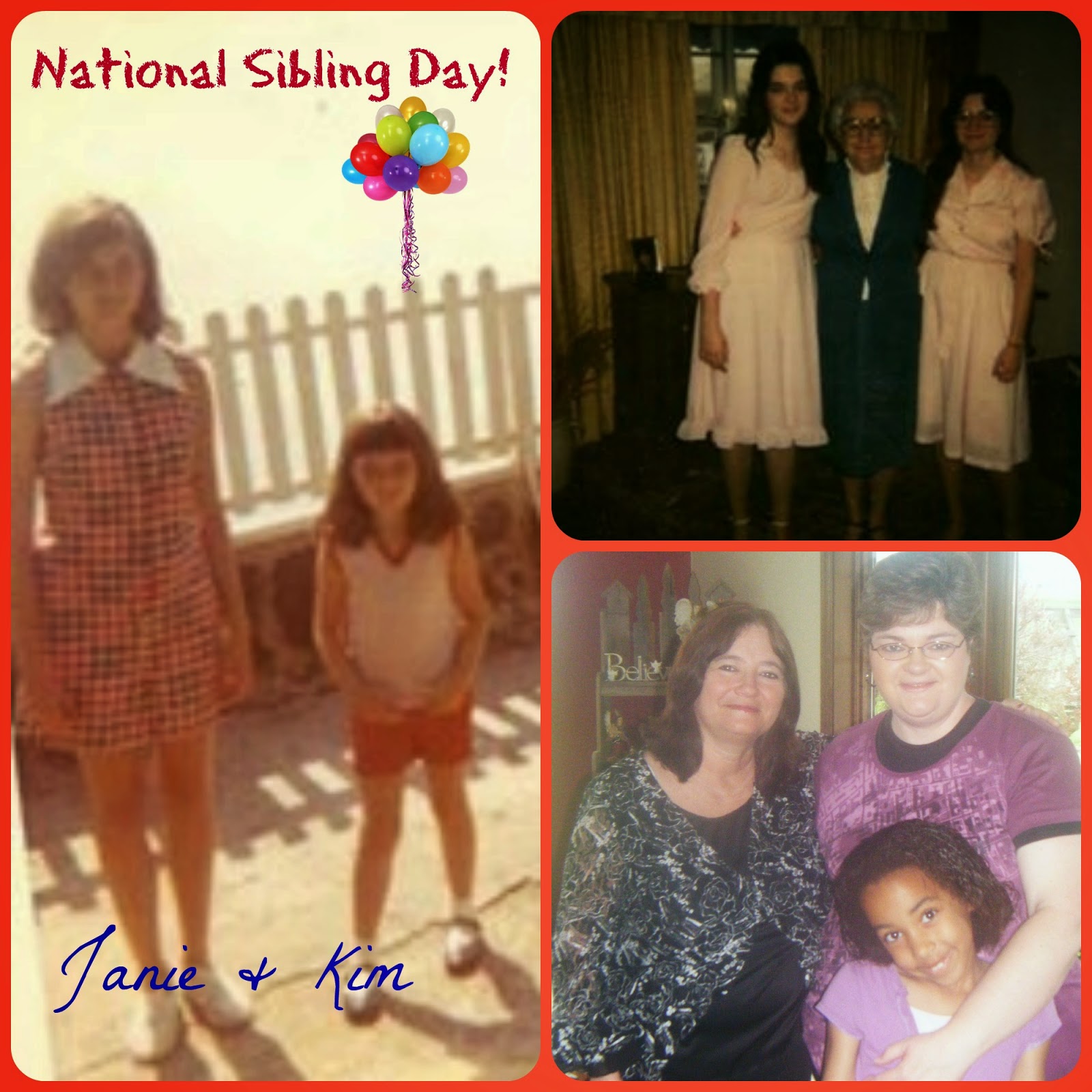 So, according to Facebook it’s National Sibling Day!  I don’t know who comes up with these but I really enjoyed looking at everyone’s tributes to their siblings on Social Media today, especially those who posted pics from the 70’s where hair length made it hard to tell the brothers from the sisters.


It made me think a lot about my one and only sister – Janie!  She’s 8 year’s older, 7 inches shorter, lives 6 hours away and we don’t see each other much.  We communicate a lot via text and email but I have to say that when it comes to my sister – it’s not the quantity of time we spend together but the quality of it that makes her so special.


Tonight was a perfect example of this as she had me laughing so hard I nearly had “tears” rolling down my legs!


She went for a colonoscopy yesterday.  She called to recount the adventure with me today – because, well, that’s just what you do with your sister.


So, the story goes like this…As is customary with the procedure you must make sure the tunnel is clear before the doc ventures to go where no one has gone before.  So, they give you a packet of instructions including the steps to follow to “clear the tunnel” the day before the exam.


Trouble is…dear sister failed to read the NO RED DYE part of the instructions.  Some people have selective hearing – she has selective reading!  So, in the morning she helped herself to a delicious cup of red jello followed by a tasty red Popsicle.  All was good in her world!


Per the instructions, later in the day, she took the 4 laxatives that she was instructed to take and then she went ahead and mixed up the powder laxative that she was supposed to take later in her favorite “Red” Crystal Lite flavor.  She put it in the fridge so it would be icy cold and delicious for her drinking pleasure later in the evening – when she felt so “moved” to enjoy it. A frugal gal, dear sister opted to buy two small bottles of the powder instead of a big container so she wouldn’t have an abundance of laxative powder going to waste. So, she measured out enough for her delicious strawberry/orange/banana/laxative smoothie and still had at least another serving left!


It was soon after this that a friend called to see how the prep was going.  What a friend, eh? This kind of friendship gives a whole new meaning to the phrase Bosom Buddies!   Having been on this journey herself, her friend mentioned to Janie that she isn’t supposed to have RED DYE, when she heard about the all red diet she’d been on!  Janie looks at the packet again and sure enough – there it is…NO RED DYE!!  EEEK! She quickly calls her doctor’s office and consults with them and they assure her she will be okay as long as she doesn’t use any more red products.


Her friend, who had previously used another product that could be mixed with sprite advised her to use the gingerale she had on hand. Sounded like a good plan to sis so she commenced to mixing up her little cock”tail” – no pun intended!


She strategically measured out the gingerale and the powder laxative and combined the two.  What happened next was straight out of a science experiment.  When the powder laxative hit the carbonation of the soda it created a volcanic spew that erupted all over her kitchen and spilled down to the floor like hot flowing lava!   The more it spewed the harder she laughed – yep that’s my girl!  We are surely related!


Now, Janie, finds herself in quite a quandary as she is currently a ticking time bomb with 4 laxatives settling comfortably in her gut, no more laxative powder in the house and laxative/gingerale volcano lava all over kitchen to clean up. She had to go to town for more powder before her laxatives went to town in her gut!


My sister lives in a valley or holler!   Due to recent floods and washed out bridges getting to town is no easy feat these days so she set out and drove like a maniac “the long way” to town.  Once at the store, noting that she could blow any minute without warning, she quickly grabbed up the powder laxative, paid at the U-Scann and jogged back to the car.


She took great pride in letting me know that she made it back up the mountain and down into the holler in epic time before another spew occurred!


Doc told her “things” looked good down under and she wouldn’t need another scope for 10 years to which she replied… "No way Doc – I’m never doing this again!” Yep, that’s my girl!!


So, Dear Sister Janie – I love ya!  There’s no denying we are sisters!  Thanks for a lifetime of laughter but especially thanks for the good laugh tonight.


To all those out there celebrating their sibling today… Here’s to you….BOTTOM’S UP!!